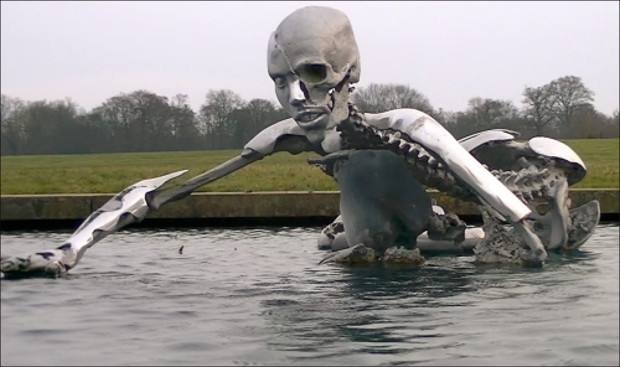 Its four-day meeting occurs annually. It’s a rite of spring. British political economist Will Hutton calls the group the “high priests of globalization.”

Powerful movers and shakers have their own agenda.They discuss key issues.

They do it year round. Once annually they meet face-to-face. They plot strategy to exploit the world’s riches. They want them for themselves.

They try to keep meeting dates, locations, and issues to be discussed secret. Word gets out. It’s official. Britain’s five-star Grove Hotel is this year’s venue. It’s a Hertfordshire, England hotel resort. It calls itself “London’s cosmopolitan country estate.”

On May 13, Infowars reporters Paul Joseph Watson and Jon Scobie visited the Grove Hotel. They claim to have “groundbraking” information.

Google’s CEO Eric Schmidt is a regular Bilderberg attendee. Watson and Scobie said his company is “merging” with Bilderberg.

“Google’s annual Zeitgeist conference, which has been based at the Grove since 2007, immediately precedes the Bilderberg Group conference by a matter of days.”

“Backed up by prior research, we were able to confirm in conversations with hotel managers and others that the Grove is now a central base for Google’s agenda to control the global political and technological landscape.”

Bilderberg’s “being recast as ‘Google-Berg’ – partly because of efforts on behalf of activists to tear away the veil of Bilderberg’s much cherished secrecy, and partly as a means of re-branding authoritarian, undemocratic secret gatherings of elites as trendy, liberal, feel-good philanthropic-style forums like Google Zeitgeist and TED.”

In May 2012, London’s Telegraph headlined “Google invites the best and brightest into its Big Tent.”

Eric Schmidt thinks “privacy is a relic of the past,” said Infowars. He “plans to turn Google into the ultimate Big Brother.”

He and Bilderberg members share a common agenda. In part, it reflects a “collectivist, permanently networked world (without) individuality and privacy.”

Infowars said its “inside source” listed the following June issues for discussion:

“These contradictions are not accidental, nor do they result from from ordinary hypocrisy: they are deliberate exercises in doublethink.”

Other Bilderberg topics include:

“….throughout our research we have found numerous deficiencies and hostilities in Google’s approach to privacy that go well beyond those of other organizations.”

It’s “an endemic threat to privacy. This is in part due to the diversity and specificity of Google’s product range and the ability of the company to share extracted data between these tools, and in part due to Google’s market dominance and the sheer size of its user base.”

“Its aggressive use of invasive or potentially invasive technologies and techniques” is unmatched.

It’s able to “deep drill into the minutiae of a user’s life and lifestyle choices.” It has no qualms about doing it irresponsibly.

It retains volumes user information. No limitations are placed on its subsequent use or disclosure. Users aren’t able to delete or withdraw it.

It retains all “search strings and associated IP-addresses and time stamps for at least 18 to 24 months, and does not provide users with an expungement option.”

It has other personal information on hobbies, employment, addresses, phone numbers, and more. It retains it after users delete their profiles.

It “collects all search results entered through Google Toolbar, and identifies all Google Toolbar users with a unique cookie that allows Google to track the user’s web movements.”

Its software provides a virtual fly-over and zoom-in capability. It does so within a one-foot resolution.

“Keyhole’s strategic relationship with In-Q-Tel means that the Intelligence Community can now benefit from the massive scalability and high performance of the Keyhole enterprise solution.”

“I am quite positive that Google is taking money and direction from my old colleague Dr. Rick Steinheiser in the Office of Research and Development at CIA, and that Google has done at least one major prototype effort focused on foreign terrorists which produced largely worthless data.”

“I think (Google is) stupid to be playing with CIA, which cannot keep a secret and is more likely to waste time and money than actually produce anything useful.”

It should be strictly regulated, “and if necessary, broken up or put out of business.” It “lays the foundations for corporate or even official Big Brotherism.”

“The cameras record details of residents’ lives.” They do so without permission. Personal privacy is violated.

In the wrong hands, information can be used “to put a commercial squeeze on people, but also to extort and blackmail them.”

In government hands, it enhances “a pretty effective and very nasty police state.”

Can Google be trusted to use this information responsibly? “Of course not.” It’s a business run by “amoral capitalists.” It seeks profits by any means.

Google and other Internet search engines “should not be trusted because they cannot be trusted.” Because of its size and dominance, Google’s “the new evil empire of the internet.” It’s a menacing “Leviathan.”

If true, partnering (merging) with Bilderberg enhances the threat. Institutionalized spying endangers everyone. Today’s technology exceeds the worst of what Orwell imagined.

Big Brother isn’t fiction. It’s watching everyone all the time for any reason. It does so with sweeping technological effectiveness. It makes Bilderberg’s ideal world more possible.